Meditation for beginners and the ONE rule for positive effect 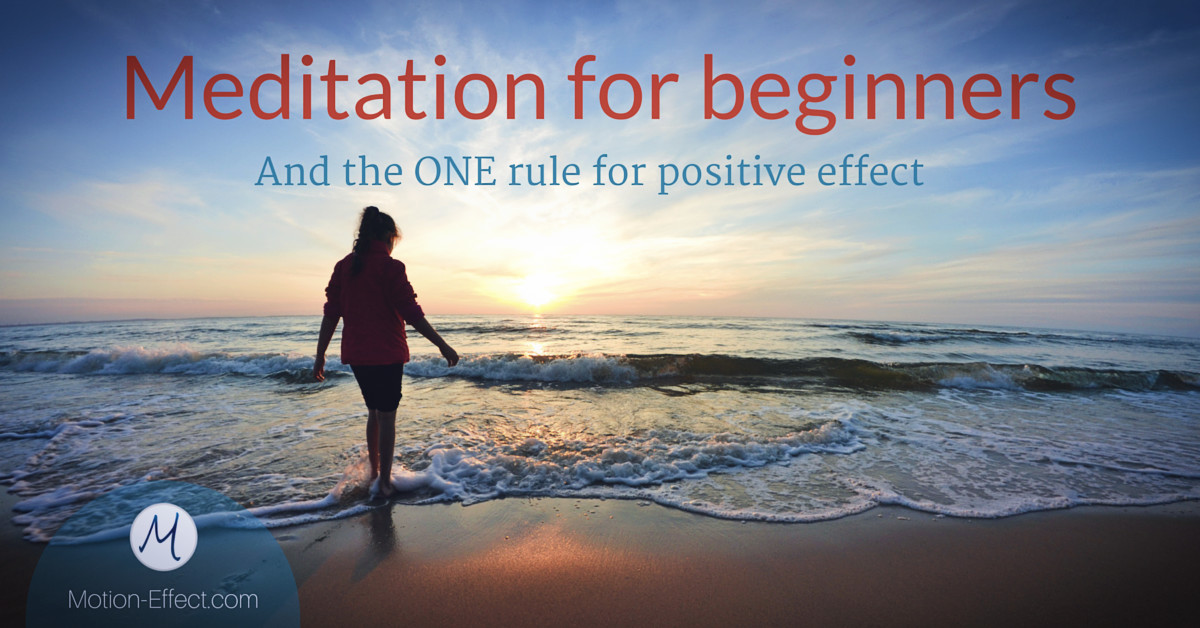 In doing meditation for beginners, there is ONE simple rule I want to repeat for having the positive effect you’re looking for. I have been mentioning this simple rule before. And I want to repeat it because I see there is one simple thing that I hear people respond with when it comes to the practice of meditation and the expected effect people have from it. It’s not working

About the expectation on the effect of meditation

Why do you want to do meditation?

Because the new breed of digital nomad lifestyle hustlers do it? Because it’s hip? Maybe you feel you’re losing your mind and are about to snap from your life struggles. Do you want to improve something?

Whatever it is, meditation should by now be regular school practice. Did you know, in some schools where meditation is taught, students have improved a lot?

Of all the countries in the world, in one of the most unbalances and crazy countries with 52 states, some schools have in fact started meditation practice with the kids. Awesome!

I smiled when I heard that. I see progress. If schools in the US can do that, anybody can. And the effect they saw in starting this practice is that the kids suddenly began to improve in class!

That's one of the results you can expect when you start having mindfulness as a daily ritual. And many other positive outcomes, as I have been listing in this post about meditation for sleep.

But you won’t have any effect on this ancient practice unless you are consistent!

In meditation for beginners, people expect some immediate divine effect. You might be lucky, but working the physical effect on the brain takes time. Slowing down can take time. Changing your body’s frequency and energy takes time.

Don’t forget the madness of this planet and the insane tempo our brains are forced to deal with every day, plus all the other life challenges.

One simple rule in meditation for beginners

So, my ONE simple rule in meditation for beginners is this:

“Carl started his walk towards his new wonderful vacation destination. Then he stopped walking. Now he is pissed of because he didn’t get the experience of he vacation”…

Haha, it was just that simple. Make this your lifestyle, a daily or at least weekly habit. Why?

You are trying to MOLD your own brain! And it takes time. One of the changes that you will work with is actually the firing of new neuron pathways in your brain. You start sending signals and using new and different parts and paths of your brain.

What scientists are now saying about meditation

What expectations do you have about your brain? When do you expect to get older and loose your “mojo”? Do you feel smart? Are you flying high being at the top of your world?

Whatever your feeling of your own mind, the state of being, and the “physicality” of your brain is, do you think you can improve some of the topics above and the capacity of your own learning and skills?

[tweet_box] “Whatever your feeling of your own mind, the state of being, and the “physicality” of your brain is -You can change it”[/tweet_box]

Societies level in the understanding of the brain is not so bright. Most humans expect and conform with being, or having a particular state of being or a specific capacity of their body and mind. And so it is.

But it is not just so…

Like 20 years ago, if I told a “common sense” human being that he can shape and mold his own brain to a higher capacity and top up his brilliance, he would laugh brutally in my face and feel smart about it!

It takes time for the earthlings to grow. Gaia’s inhabitants (not all) are creatures in the state of being like 4-5-year-olds in the development progress.

But now we (scientists) know that the gray matter of the brain can be developed further IF we choose to and put it into motion. And there are methods to do that. Meditation has been shown to be one of the practices which have this expanding and growing effect on the brains matter and neurons.

That rocks! So what would you like to develop today?

Now, if you really want this to happen, the ONE rule for meditation is essential.

Begin, and never stop. If you stop walking, you’re not moving forward. Right?